A Chat With Sylvie Johnson, Art Director of Merida 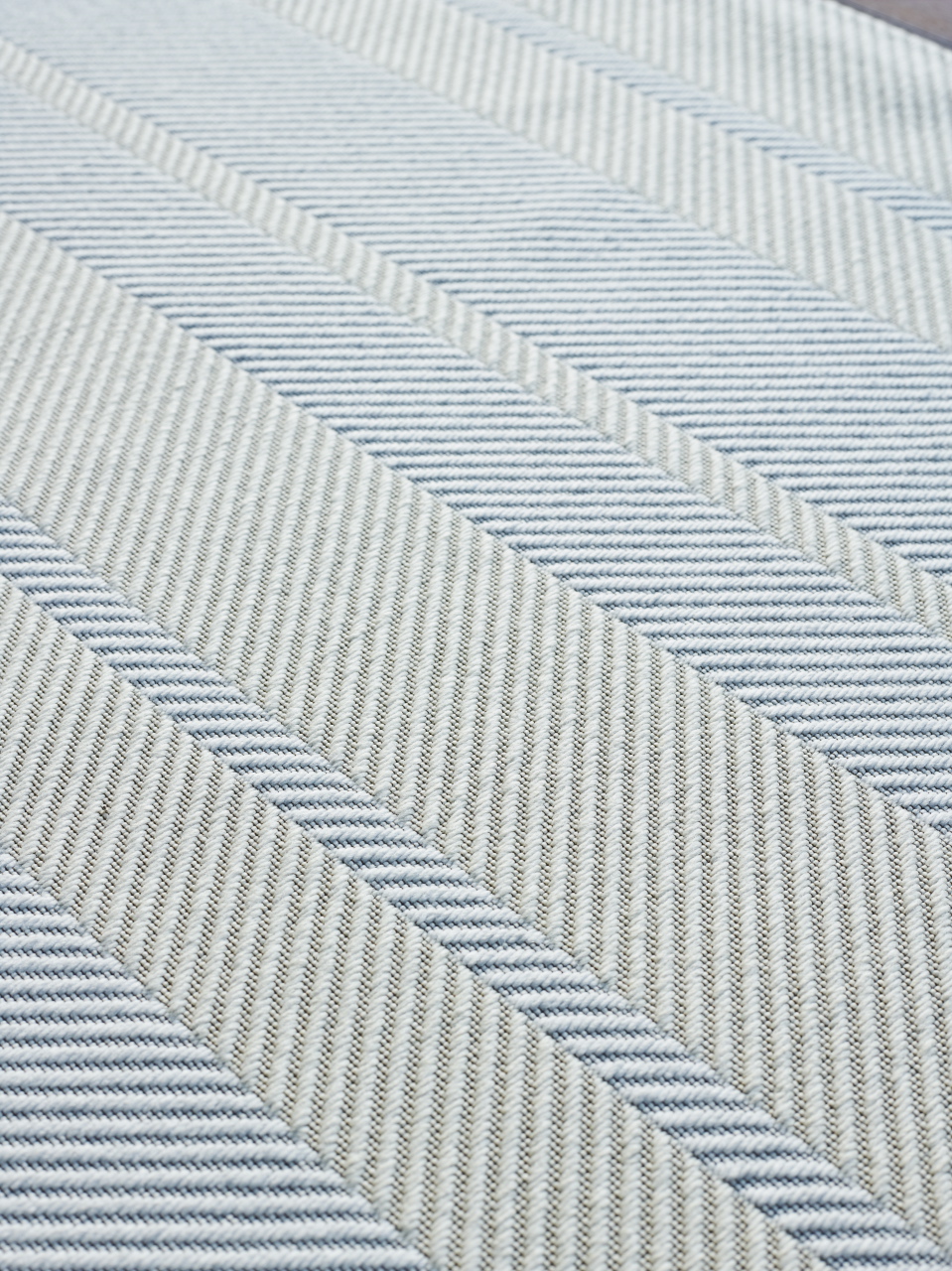 “For Cupolo, the shapes and widths of the various herringbone stripes can be customized to change the scale.” 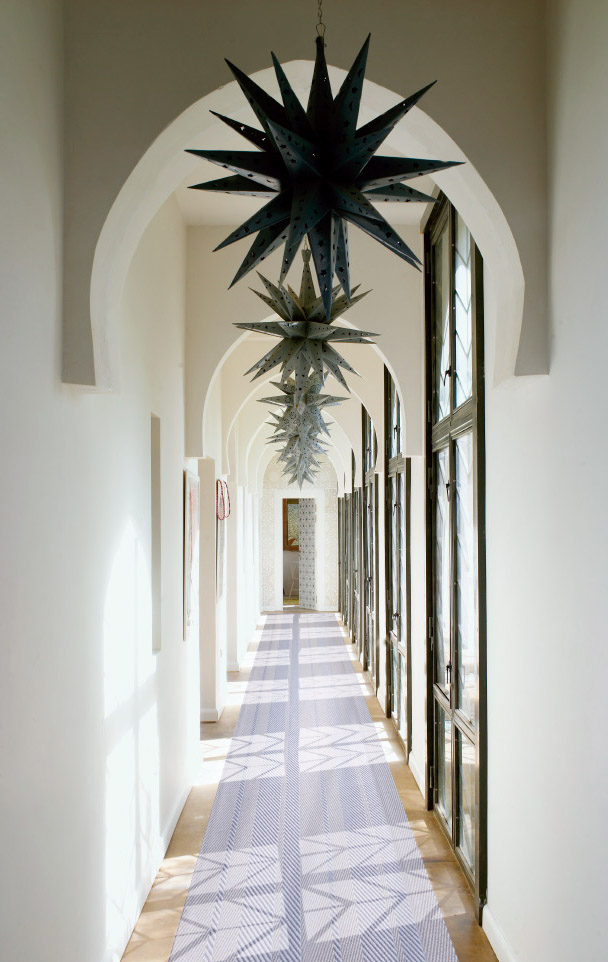 The Cupolo rug in a Byzantine-inspired hallway. 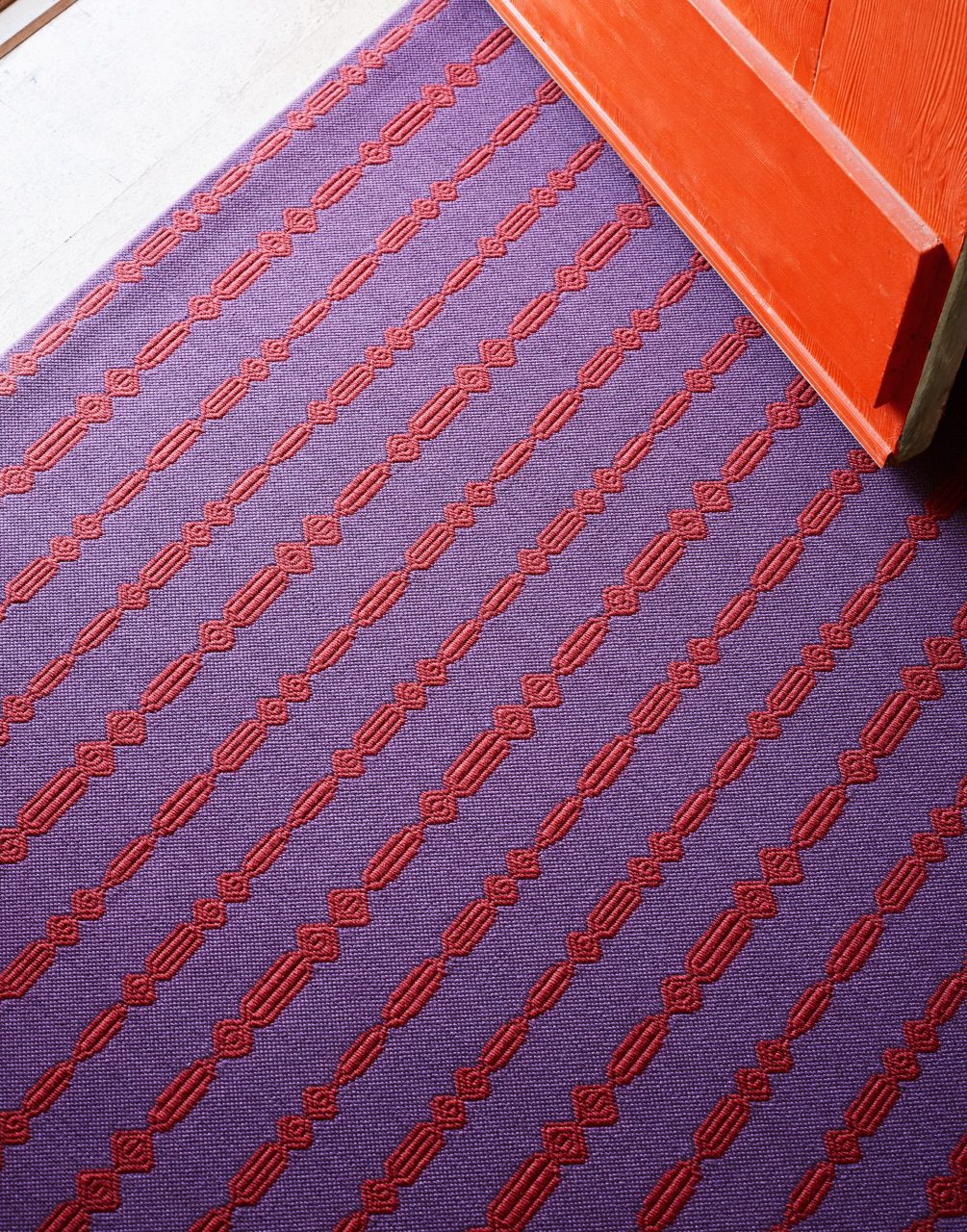 “A modern translation of an ancient design motif, Vasari is a richly layered construction that adds subtle dimension. Red and purple were important colors in the Italian Renaissance and for the Ottomans. Purple was for royals and upper society because it was expensive to make. These colors were linked to power (kings, nobles, popes, the Medici).” 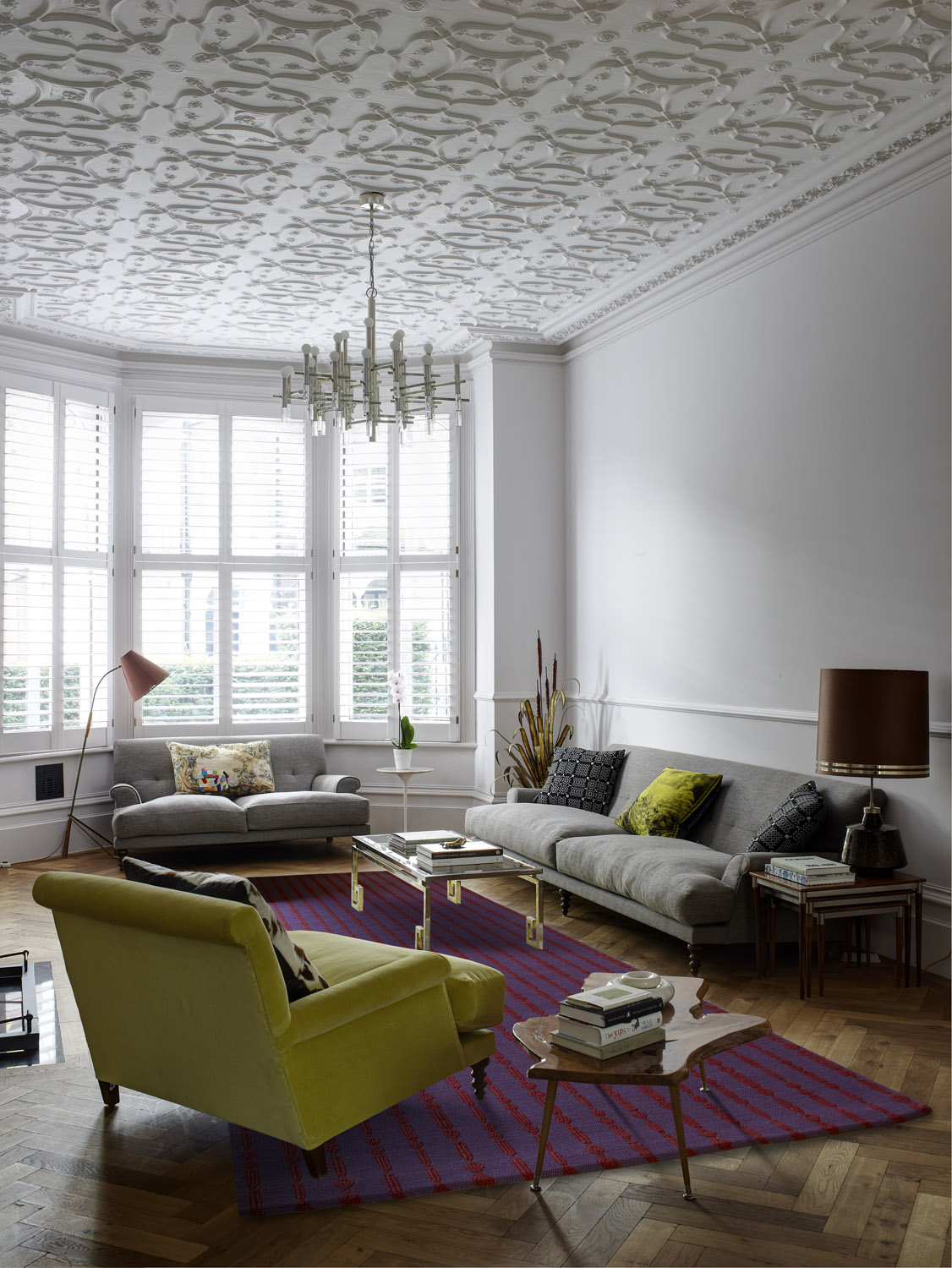 The Vasari rug works beautifully with both neutrals and bold colors such as chartreuse. 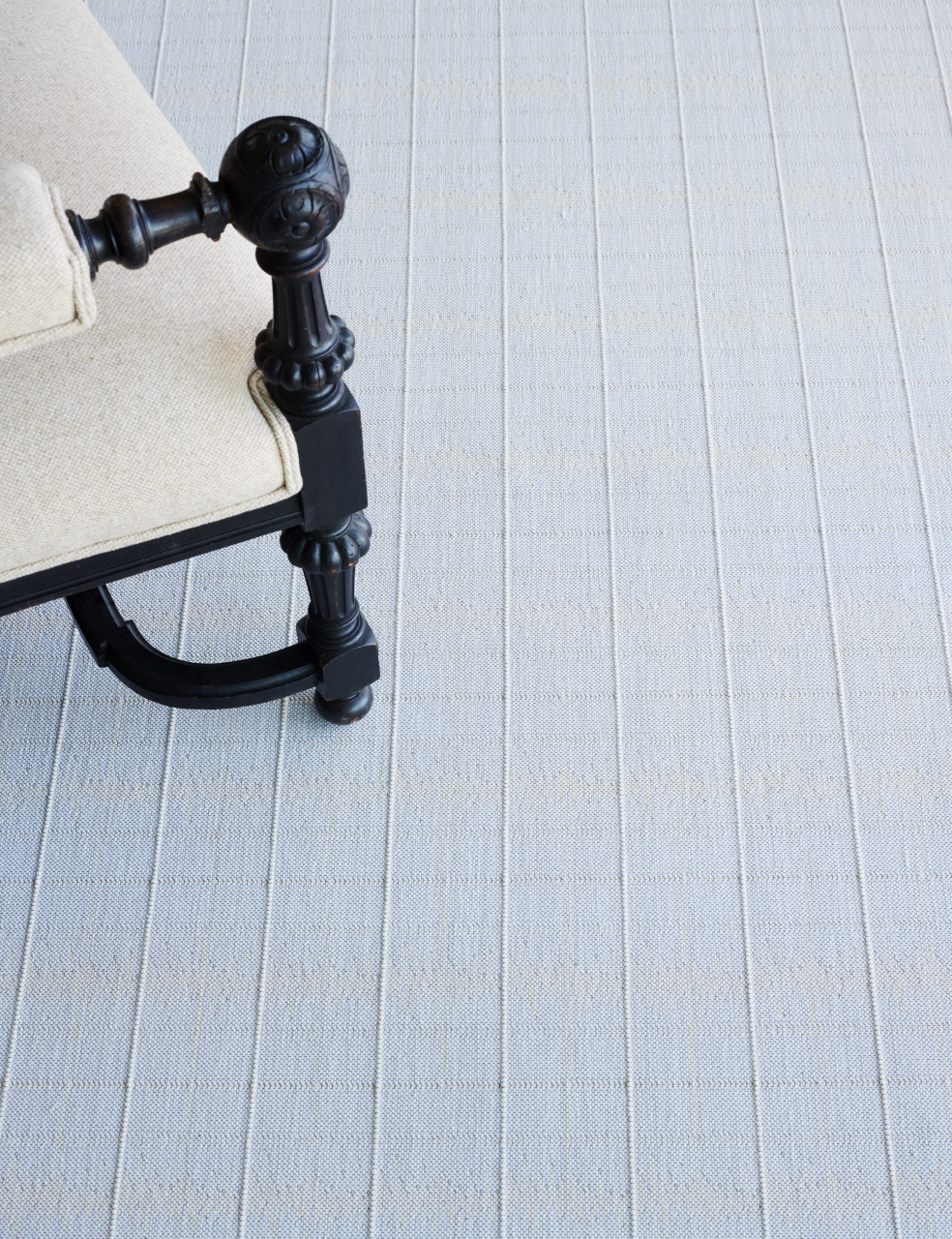 “A playful interplay of crimped and felted wools, Strello is a modern and refined take on a classic plaid. The design uses an ‘unstructured stripes’ technique that combines different yarn weights for a deeper softness that is still durable. The color used is Marble, which was used in many sculptures during the Renaissance.” 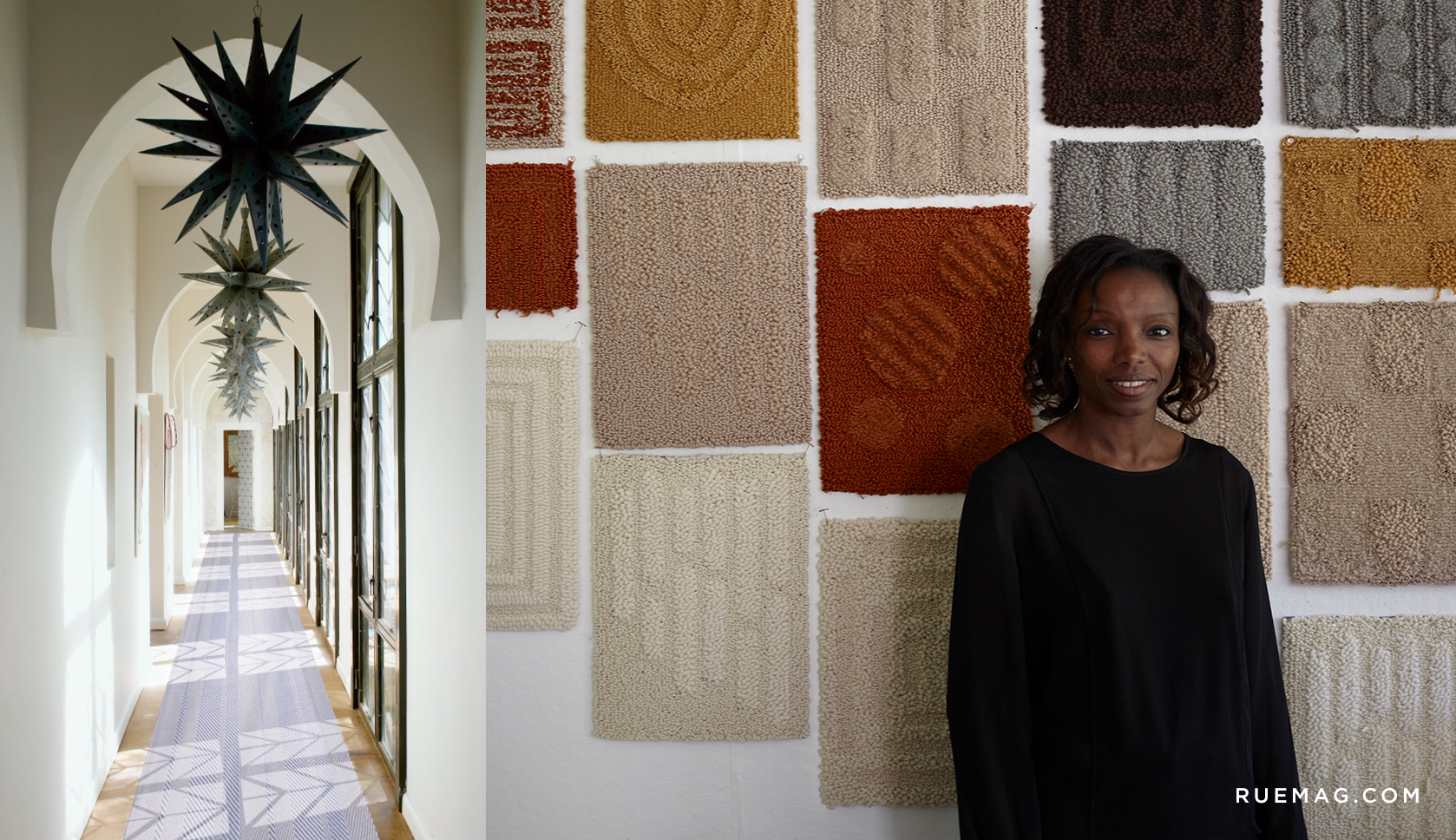 Merida is a unique brand amongst its peers. Whereas many rug companies solicit the expertise of weavers in Asia, Merida makes their natural fiber pieces in Massachusetts. Having taken over a former mill, the brand’s founder Catherine Connolly amassed a team of local experts who are masters in traditional methods of rugmaking. Over two years ago, she brought on the very talented and creative Sylvie Johnson as the company’s Art Director. This summer, Merida launched their Portfolio Collection that features historic motifs from the Renaissance and Byzantine eras. We chatted with Sylvie about her career path and the new collection.

Tell us about how you became Merida’s Art Director? What is your formational background?

I originally studied economics but after my master work in the art business for a few years, I ended up starting my own Parisian atelier company in 2003. During that time when I was working in the art business, planning and managing architecture and design exhibitions, I came up with the idea of haute couture for decoration. I wanted to create textiles with beautiful materials and cultural art references. While on vacation in France, I stumbled into an exhibition and instantly fell in love with the textiles on display. Soon afterwards, I decided to take a year off to teach myself how to weave and eventually start my own company.

I have been Merida’s Artistic Director for two and a half years now. This is my fifth collection and I am so proud of what Merida and I were able to build during this time. Catherine (Merida’s CEO) is very open-minded and I have the freedom to create collections where we have time for research and practice.

What differentiates Merida’s rugs from other options on the market?

We make all of our rugs in the Fall River, Massachusetts workshop using a mix of heirloom looms and machines that we combine with handwork to design all the rugs. What differentes Merida is our innovation on those heritage looms using master-level design and technique. We only use our own proprietary yarns, which have been developed in house from scratch. I like to design new weaving techniques that no other brands are doing, such as a crimped yarn that took 2 years to develop in Belgium.

We only work with rapidly renewable resources – plant and animal fibers that can grow in less than 5 years. We do not use any synthetic/oil-based fibers in our products. Not only for aesthetic reasons but also for their contribution to the carbon economy.

All wool we use in the rugs are either from New Zealand or Great Britain where they have strict and enforced regulations regarding animal treatment. Any excess yarns Merida donates to RISD and UMass Dartmouth textile programs as well as to a series of knitting and weaving groups in the Fall River, MA area.

Let’s get the new collection that you’ve launched. What is the inspiration for the Portfolio Collection?

Portfolio 2020 is inspired by the colors, architecture, and artistic elements from the Italian Renaissance and Ottoman Empire.

Why did you choose those historic periods as aesthetic references for this series?

For the last 13 years, I have spent the last week of January in Florence, a city that I love. Both the Italian Renaissance and Ottoman Empire were filled with artistic genius. Art and culture were in the center of Florence and Constantinople, and they were the center of everybody’s life, including those in economic and political power.

In what ways do the different rugs reflect the Italian Renaissance and Ottoman Empire? What motifs can be seen?

The collection is full of references to Renaissance Italy with paintings and sculptures in the Uffizi Gallery and amazing stone marquetry in the museum de la Pietre Dure. The colors for this new collection can be seen in lots of Renaissance paintings from artists like Tintoretto, Botticelli and Raphael as well as in details of architecture like the Pitti Palace. Many of the bold colors in this collection (like orchil, grenat and verona) were used for bankers, popes and medici because they were rare and difficult to produce, requiring a long process and many unique skills to create.

Head to our slideshow to take a look at Merida’s Portfolio Collection designed by the brand’s Art Director, Sylvie Johnson. 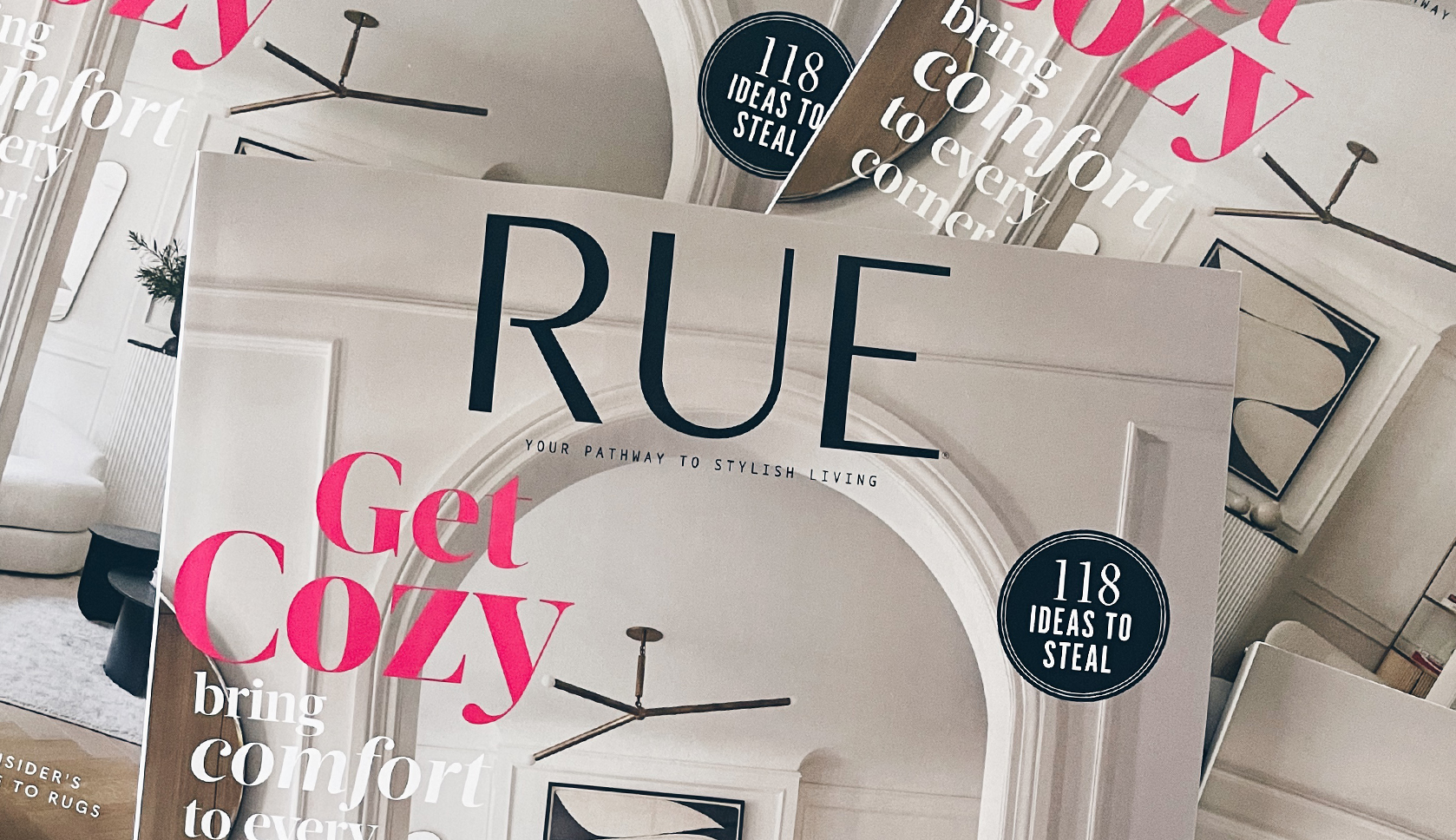 Editors' Picks / December 20, 2021 Our Winter Issue is on Newsstands Now!
We are so excited to share our winter issue, on newsstands now!   To find a copy near you, click here for a... 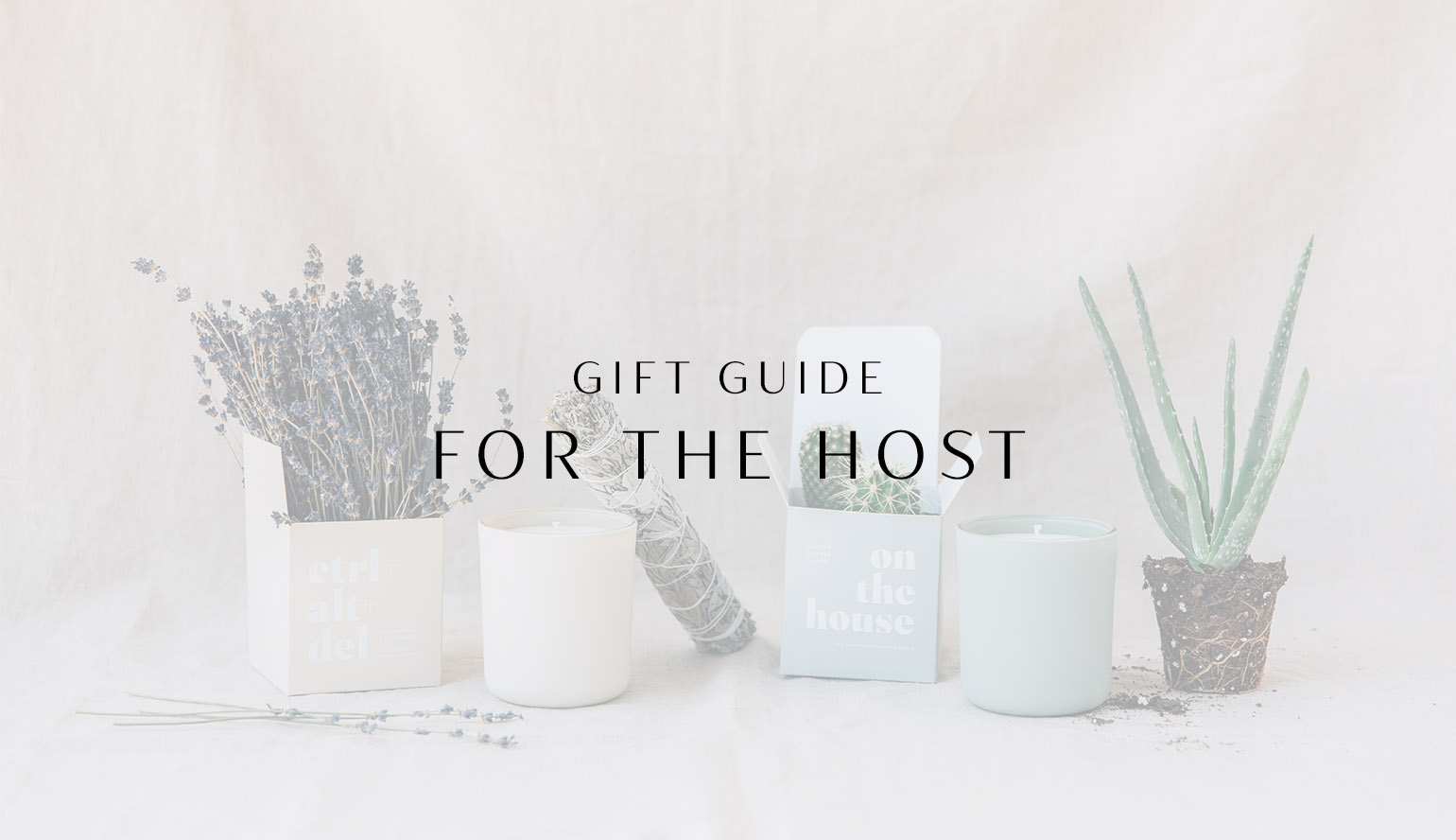 Editors' Picks / December 2, 2021 Gift Guide: For the Host
The number one rule of holiday parties: never show up empty handed! Gift an item from this list and you’re sure to be... 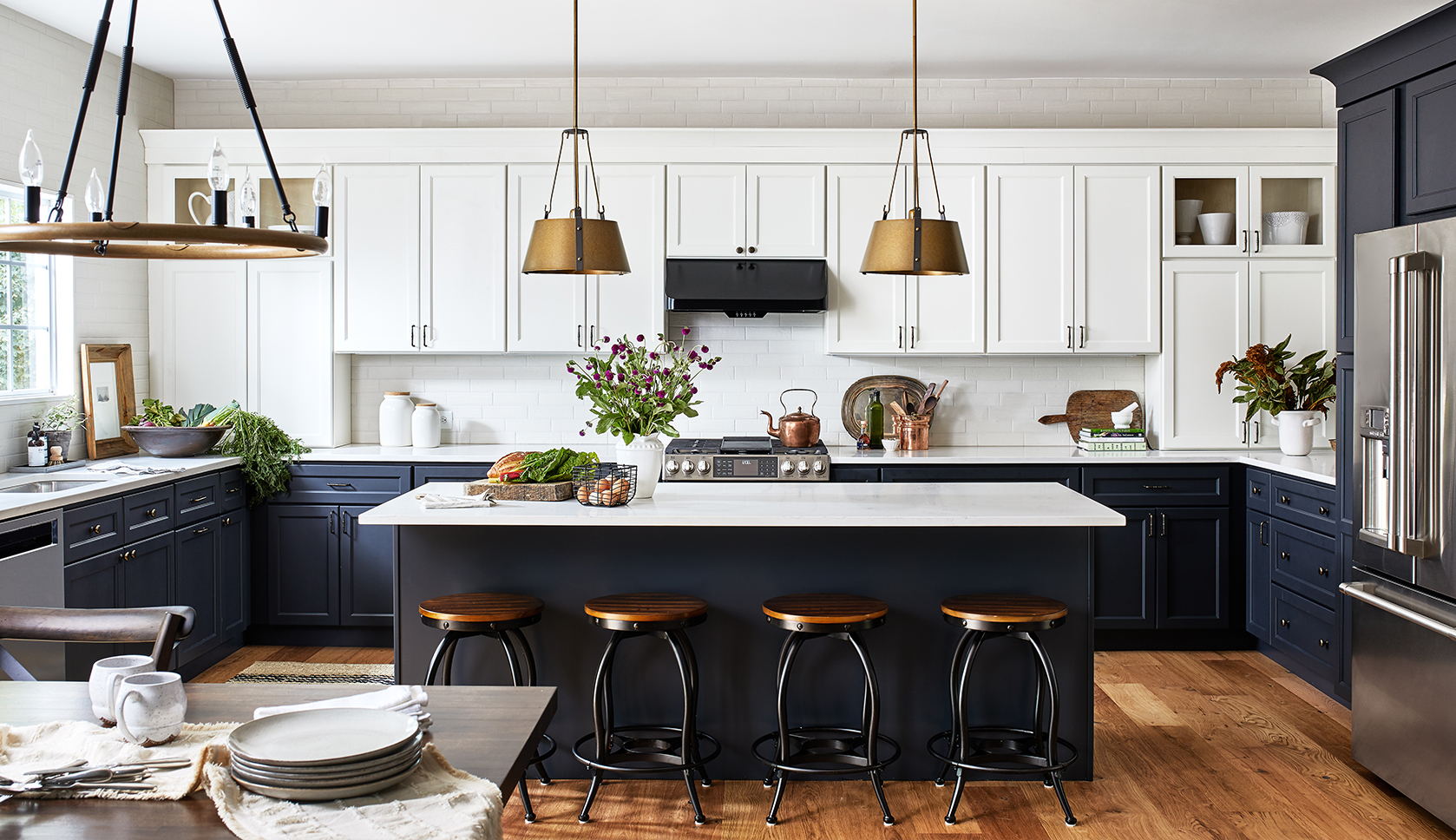