A Chat With the Spanish Rug Designer Nani Marquina 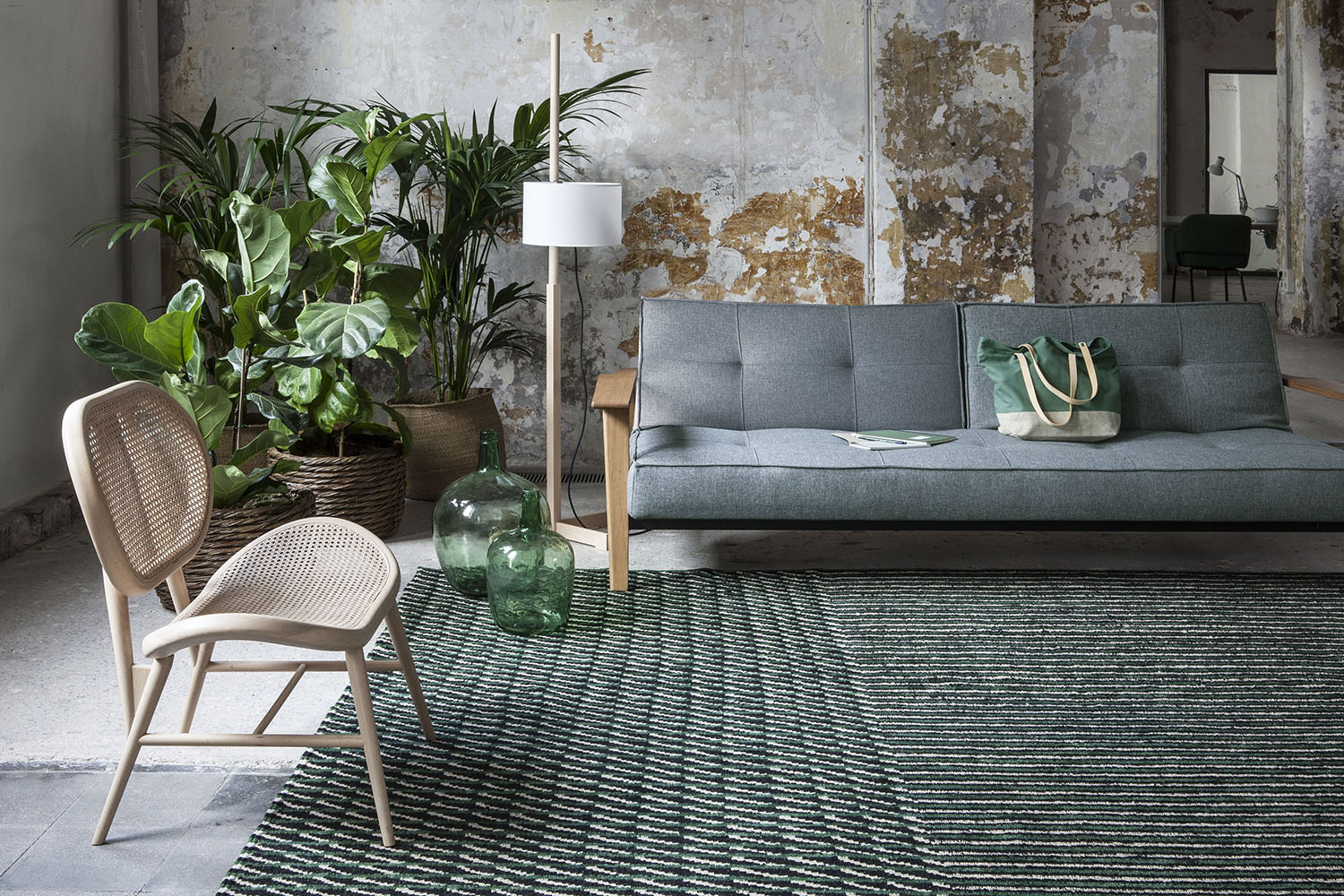 The Blur Rug in Green is designed by French designers Ronan & Erwan Bouroullec. The lines are actually are created with a complicated technique that ensures that they have a blurred effect. 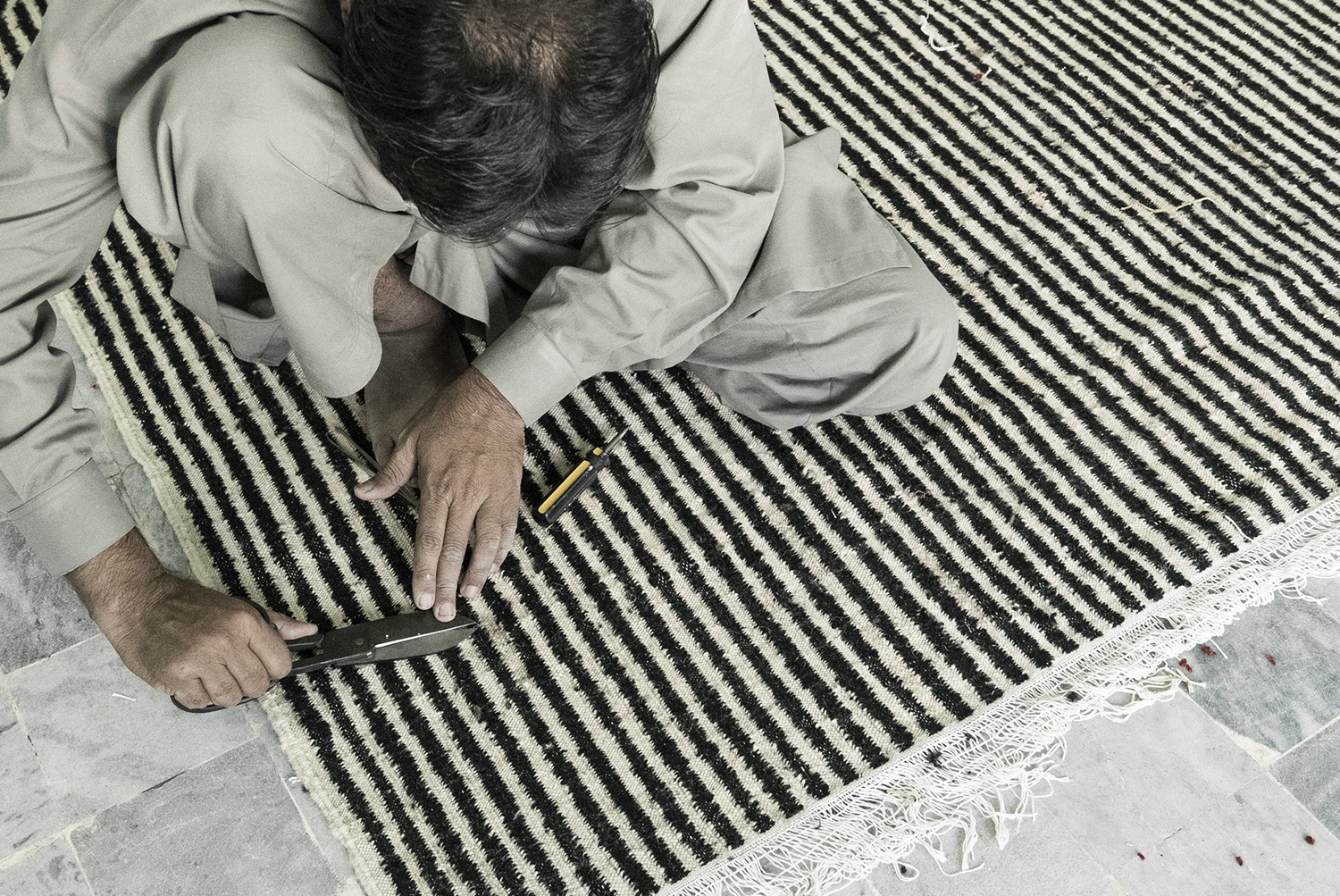 All of Nanimarquina’s rugs are handmade by artisans and take up to two years to design. 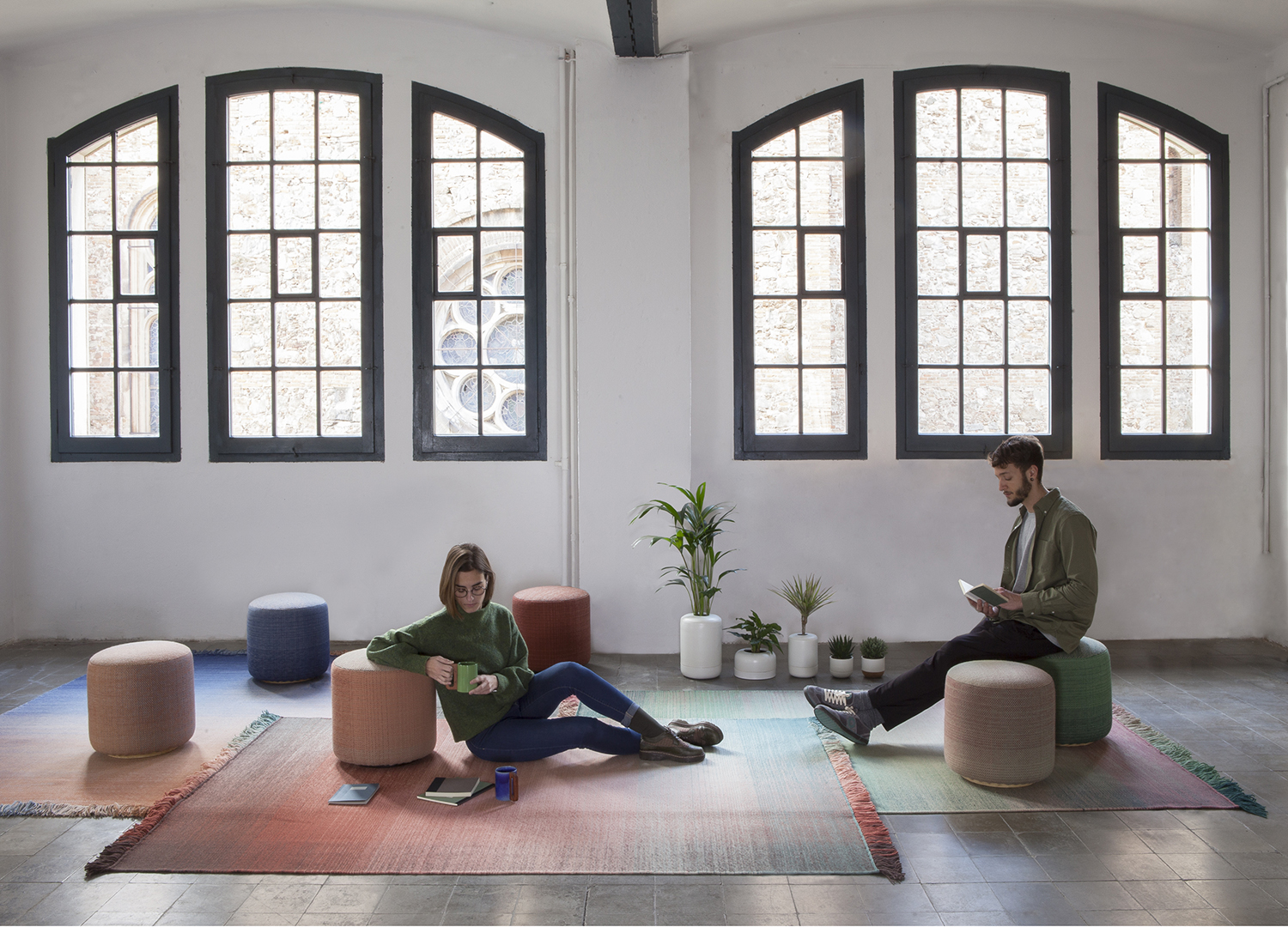 The Shade collection designed by Begüm Cana Özgür has a double ombre pattern to it that requires a mathematical graph to guide the weaving process. 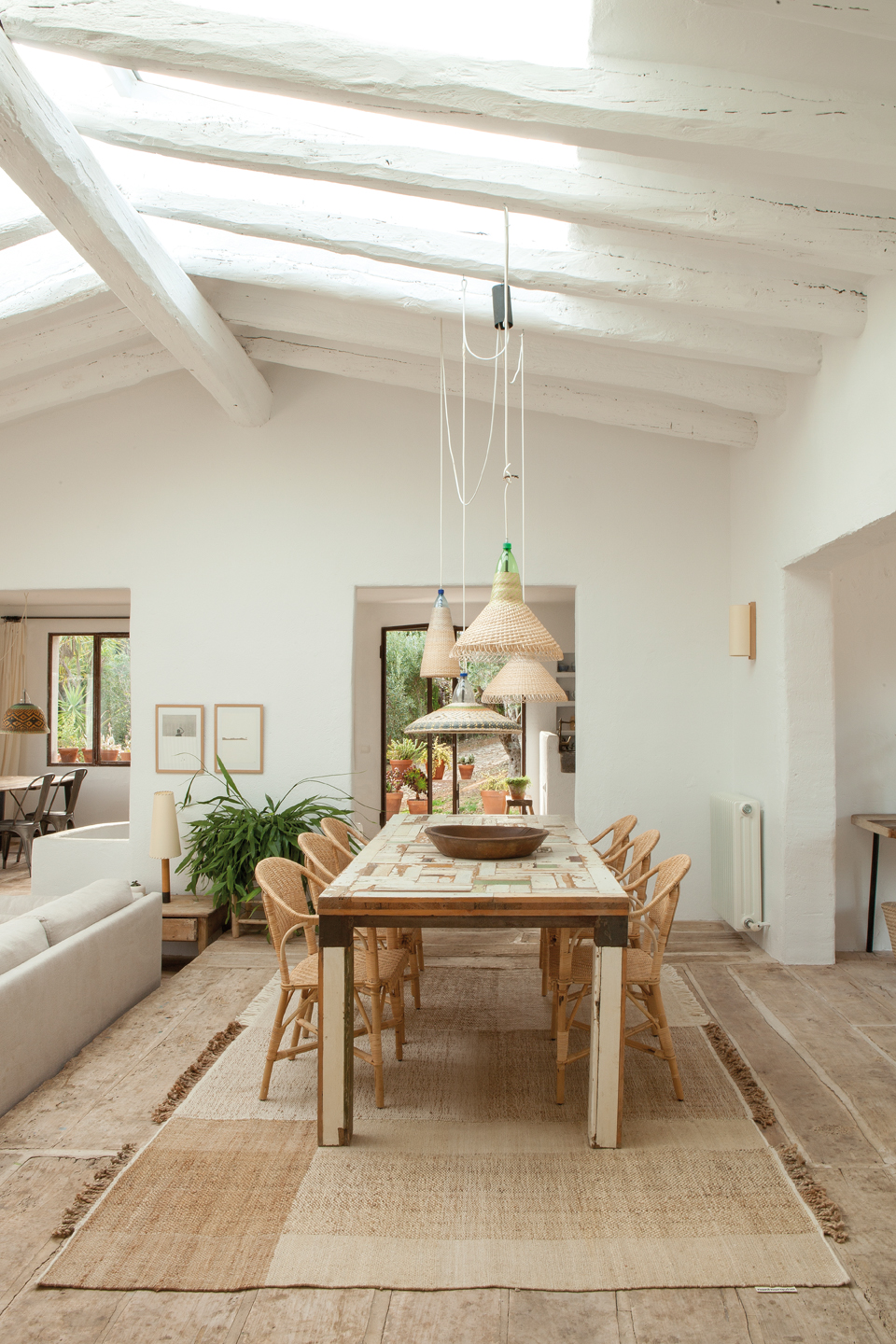 The Tres Collection uses three different fibers to create a rug that has almost a patchwork effect. 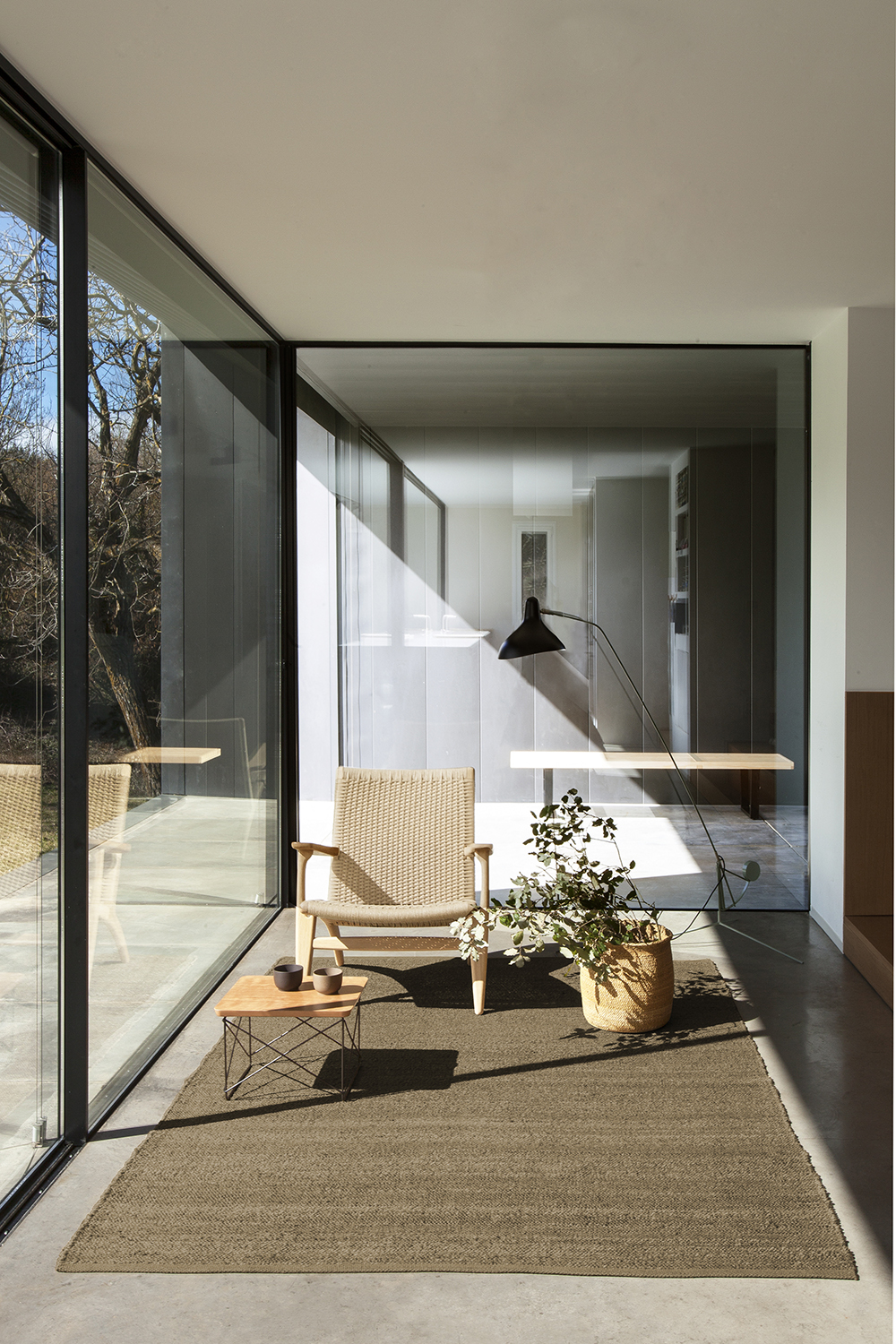 Herb is Nanimarquina’s most minimal rug collection, made of jute. 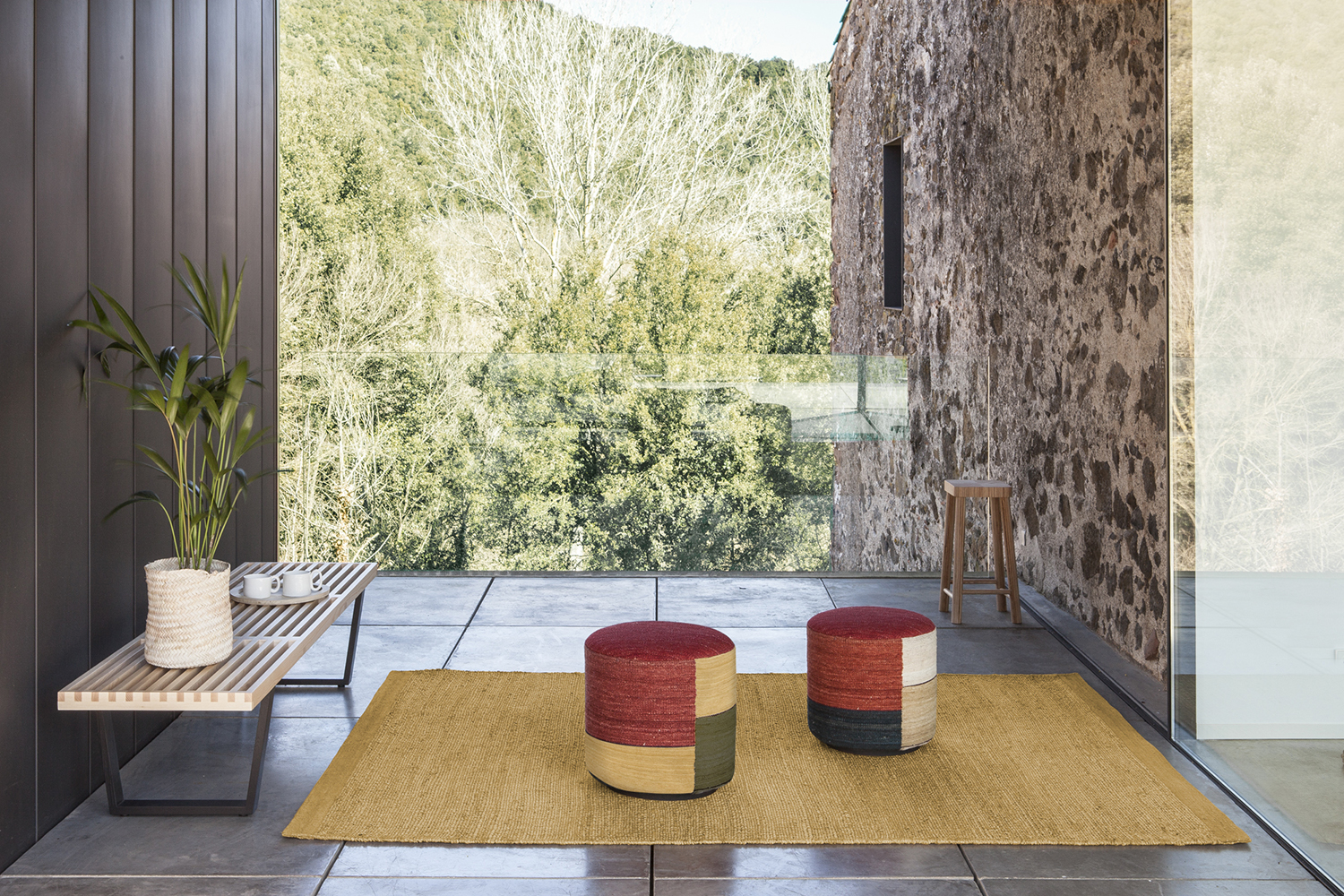 A few of the rug collections come in poufs, like this patchwork one. 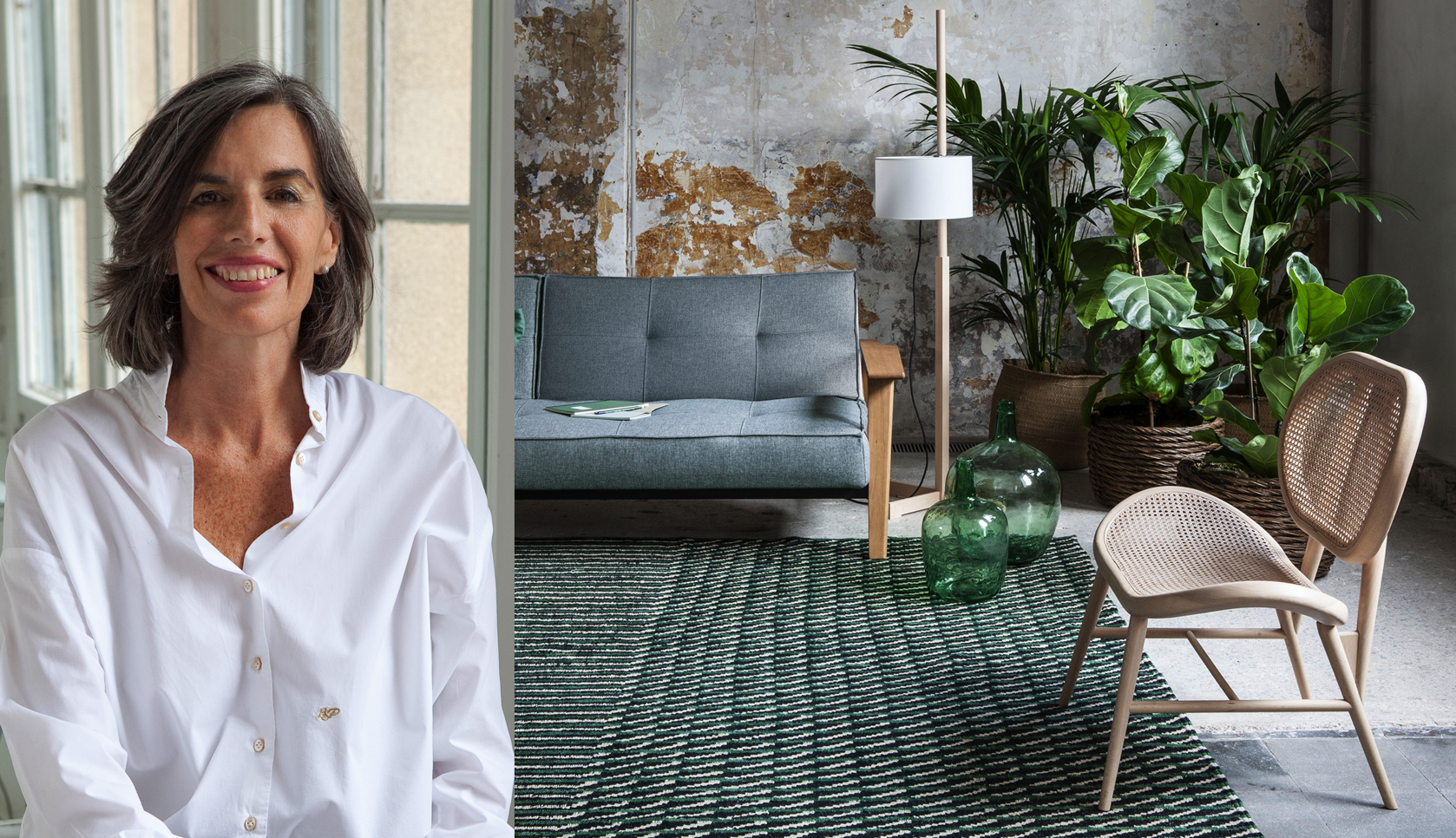 Nani Marquina, the founder of her namesake rug company, Nanimarquina, is not what you’d expect. For such an accomplished woman, who has created a brand that is at the top of its category around the world, you’d expect a much more intimidating experience. But in reality, she exudes a warmth and ease that makes 30 minutes seem like 5.

I would know – I had the chance to chat with her while in Barcelona, where I visited her studio. In a bright and airy factory with cutup windows looking out onto Barcelona’s rooftops (and Sagrada Familia, I might add!) that has been converted into the headquarters for her mostly female team, I was given the chance to see the design process up close, where we browsed large IKEA bins full of yarn and rug samples, and then, headed to her office to discuss her brand and Spanish design.

How did you enter the world of rugs?

I didn’t study textile design at school, in fact, I was an industrial designer. When I finished my education, I wanted to start my own company. By working with my father (the famous industrial designer, Rafael Marquina) in our shop, I came to realize that in Spain, there were few rug options, especially contemporary ones. So that’s when I went to a carpet manufacturer, to see if they would create my designs – at first, I barely had any money so they had to take a chance on me. I had to get creative with both the aesthetics and economics of the business.

After a while, I realized how important the floor of a home is to me and now, I am fascinated by them. Whenever I travel I pay attention to what floors and rugs are used, and have favorites such as the black and white tiled floors of Prada’s store in Paris.

It’s interesting that you could see that there was a market for rugs right away. Why do you think that they didn’t exist at the time in Spain?

This isn’t the case these days, but back then the rug was the last item that came into the design of a house. First, it was the structural elements of the home, the interior design of it, then the most important pieces of furniture, such as a sofa and dining table, and then finally lighting. Rugs were part of the “textile” category that wasn’t that significant to home at the time. It was even the case that there was just one company making contemporary textiles, thankfully now there are more.

Spanish design didn’t offer many options and had a lot of catching up to do with the rest of the world in the ’70s and ’80s. They were just starting to design things that broke the mold.

For those who wanted to buy furniture, there were so few options. Only wealthy families could afford to buy furniture that was imported from elsewhere. There really wasn’t a culture of design – Spain was closed for so many years from the rest of the world and just started to open itself up.

So when you started, did you know what you wanted to do right away in terms of the rug’s aesthetic and quality?

No, not at all… it’s something that you discover over time. If you are a pioneer in a new field like I was, then it’s impossible to know exactly how you want things to turn out, but you start to create an aesthetic and a vision as you go through the process. It’s not something premeditated, it comes out as you work.

In 1993 you moved the production side of Nanimarquina to India. What could you achieve there that you couldn’t by manufacturing in Spain?

How we began to work in India was from a stroke of luck – at the time, Spain was in a recession and as a small company we were facing some difficulties in growing the business. Soon after the Olympics, we were commissioned by an important hotel in Barcelona with a prominent designer attached to the project that wanted us to create rugs that had very intricate details that would require it to be produced by hand instead of by machine (like we had been doing in Spain previously). Since the project had strong financial backing associated with it, it allowed us to invest in looking for a new manufacturing partner.

Working with the artisans in India was incredible – their ability to make anything we proposed and in just a short time, truly surprised me. It allowed us to get creative and to really improve the quality of our rugs.

India has such a rich tradition of textiles, was it difficult to communicate your vision to them?

In reality, although they are artisans they operate as if they are a factory. They do the dyeing, weaving, and trimming all in one place. Their focus is on technique and they take hand-made manufacturing to a whole new level. But the design came completely from us – it was a great collaborative experience where were supplied the creativity and they the technicality.

I’d like to return to the topic of Spanish design – what makes Nanimarquina a company that is part of Spain’s design tradition?

There’s something very characteristic of Spanish design, that I think at Nanimarquina we follow, that is “daringness”. I think that’s why we’ve had so many celebrated painters and creative minds. We have a passion that we infuse in everything we do. Through some of the hardships that we’ve experienced, there’s a drive to Spanish creatives that is unique, we’re impassioned people. And we also are inspired by the Mediterranean, which you can see in the colors that we use.

As the current president of FAD (Fostering Arts and Design, a non-profit association of design professionals) you must come into contact with great designers in Spain.

At first, we had renowned architects making an impact within the design community worldwide. But now, with the younger generation, there’s an incredible group of product, interior and graphic designers that are truly talented and bold. Their work is powerful and ground-breaking, bringing something new to the design scene.

So you are Barcelona native – arguably one of the world’s most trendy and vibrant cities – can you share with us, some of your favorite local spots? Besides the Nanimarquina showroom, of course.

Jaime Beriestain: a design shop and restaurant in the Eixample district. There’s a bar in the back that few people know about.

Mordisco: I love any one of the restaurants by the group Tragaluz. This one is no exception.

La Casa Vicens: this is newly restored home designed by Antoni Gaudí. It was his first full architectural project and is an interesting mix of different aesthetics that makes the home feel very contemporary.

Azultierra: filled with antiques and interesting pieces, there’s always something that inspires in this furniture shop.

You can shop Nanimarquina’s rugs in their showroom in New York or find a retailer near you. 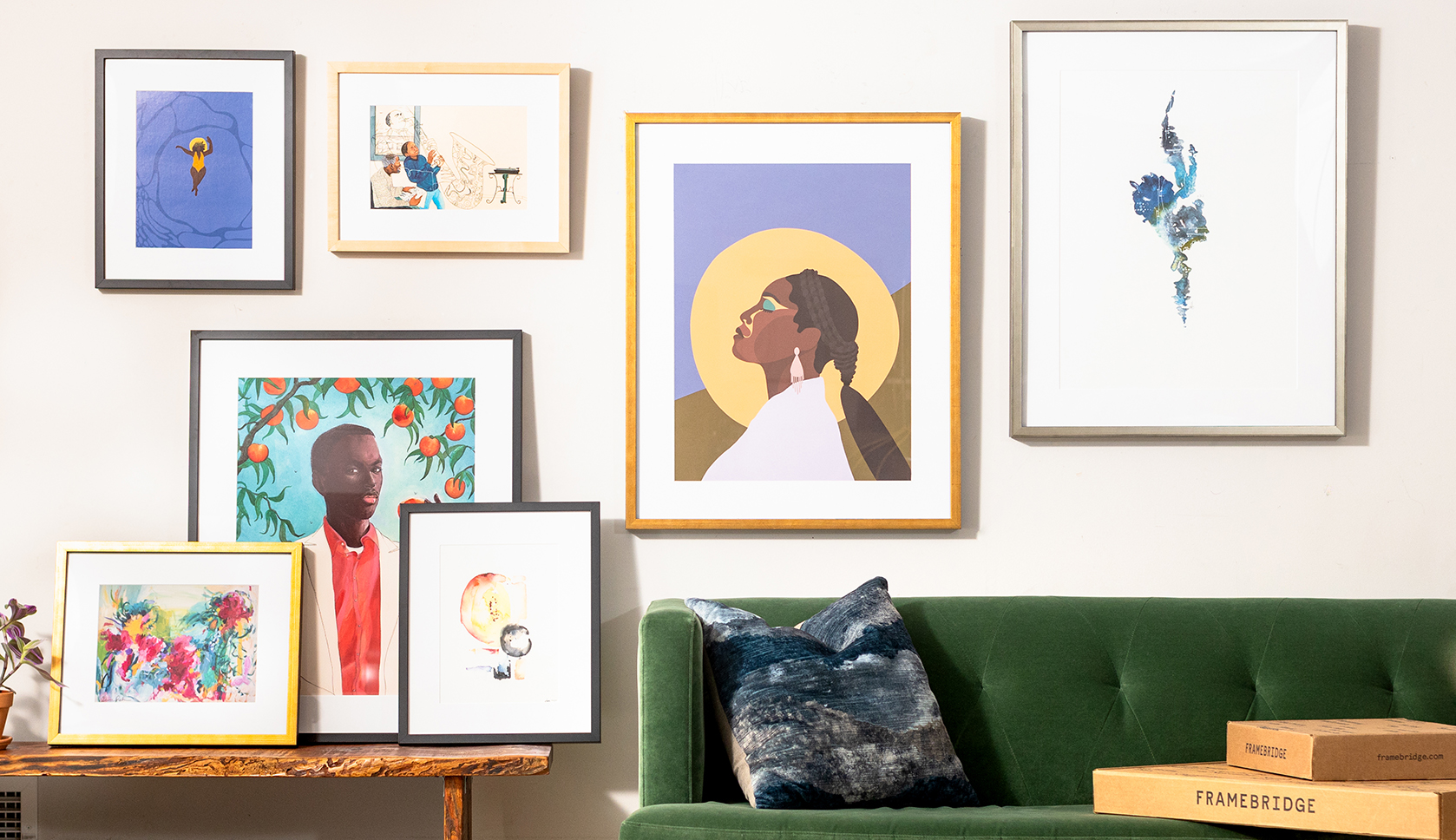 Editors' Picks / September 24, 2020 Framebridge Opens The Black Artist Print Shop
Before 2014, you had two options when it came to framing artwork. Pray that a standard sized frame from your local... 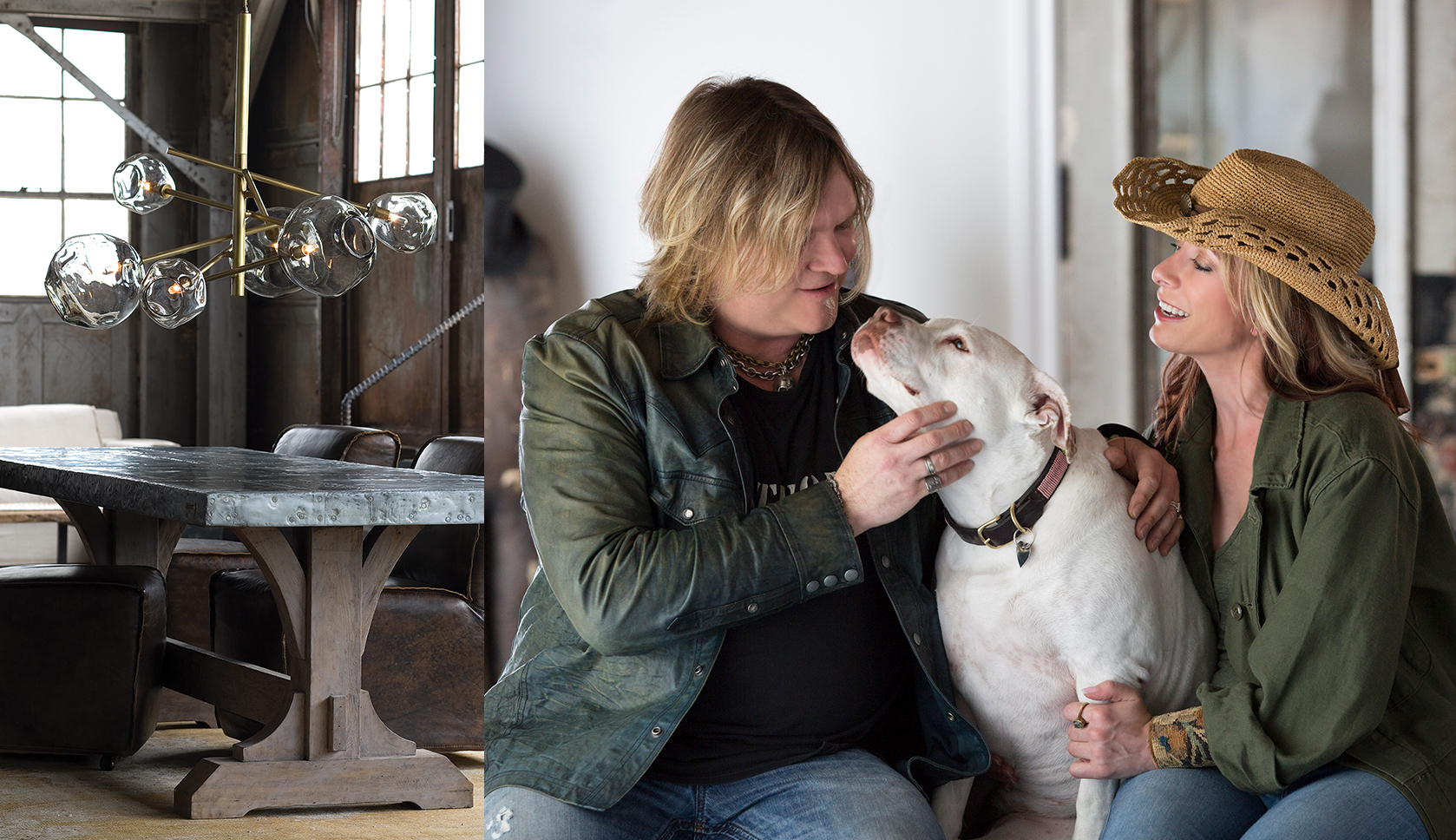 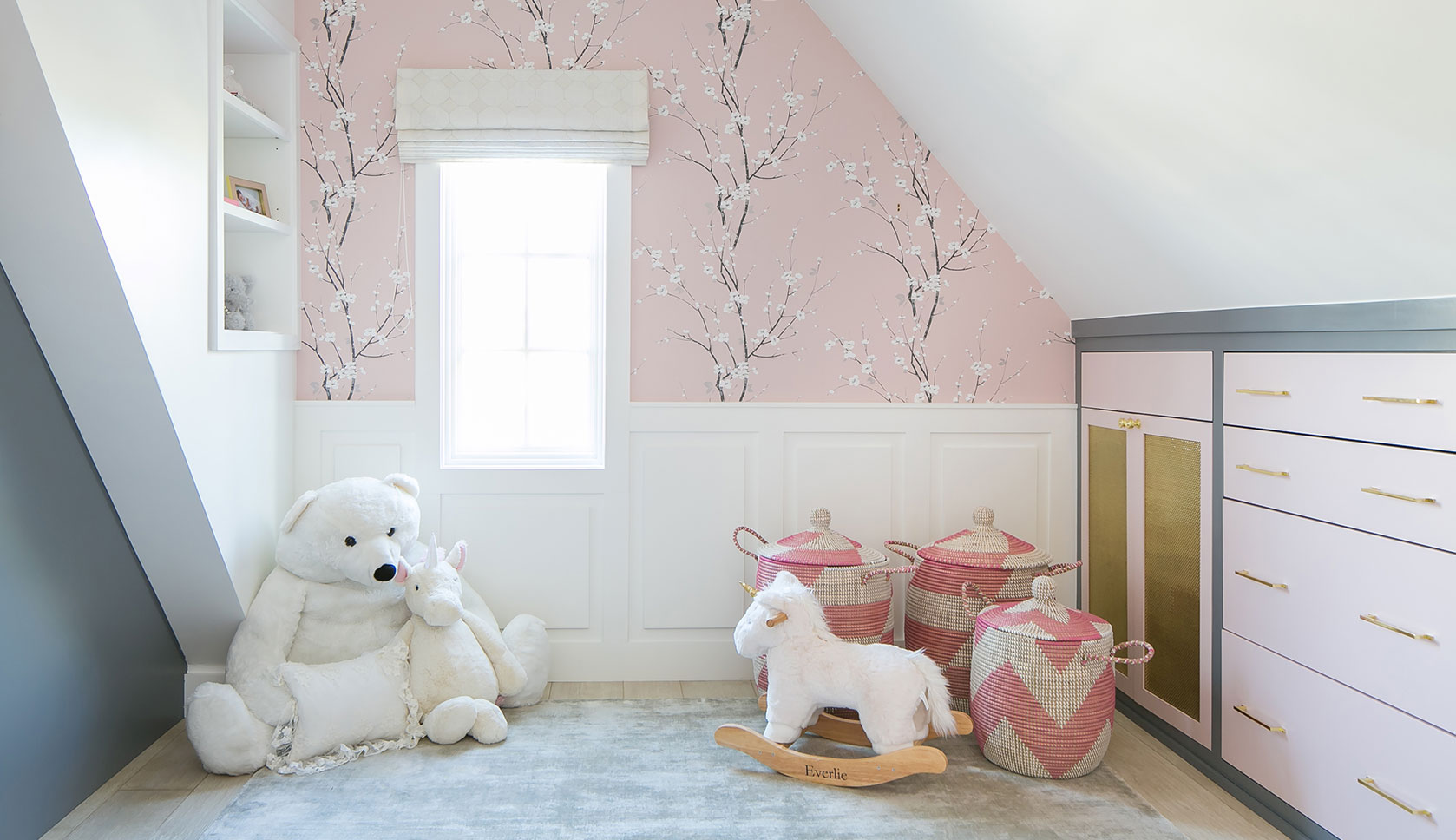 Even with some traces of normality returning to our everyday lives, one thing has remained completely off the table: travel....